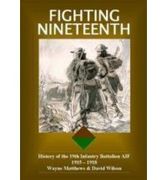 Export to Outlook or iCal (.ics)

We are excited about the next event for Mosman Library’s Great War project Doing our Bit: Mosman 1914-1918. David Wilson has kindly offered to talk about the book he co-wrote with Wayne Matthews Fighting Nineteenth History of the 19th infantry BattalionAIF 1915-1918.

The 19th Infantry Battalion was one of four infantry units – 17th, 18th, 19th and 20th – that comprised the 5th Infantry Brigade. This talk will be of interest to military researchers and Mosman families whose relatives from the 18th Battalion fought in the disastrous battle at Hill 60 in 1915 and are now remembered on the Mosman War Memorial.

Looking at some of the fascinating characters that joined the 19th including Percy Storkey VC; an Olympic swimming champion; an alleged stowaway; six wine-tasters captured by the Germans and the man who would later write “Eternity” on the streets of Sydney, David will bring the battalion to us.

David will discuss the variety of research material now available on-line and still have time for  Q & A.  We hope this insight will provide you with sufficient clues to perhaps pursue your own relatives from among those gallant men of the First AIF.

RSVP for Fighting Nineteenth History of the 19th Infantry Battalion AIF 1915-1918. A talk by author David Wilson to add comments!